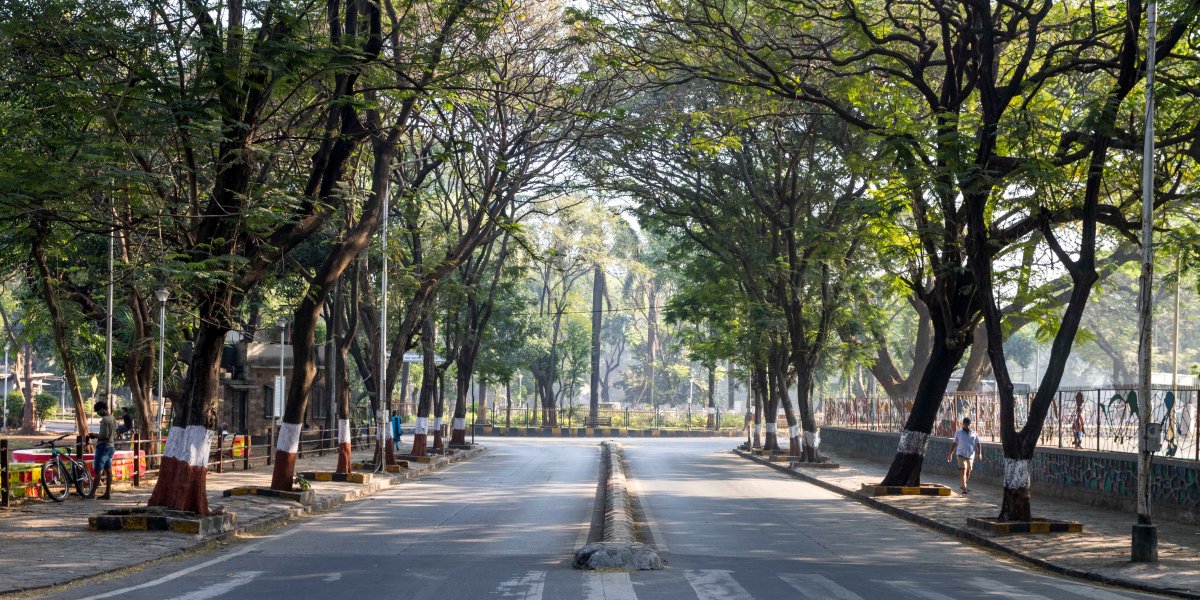 Mumbai’s GDP is expected to touch $265 billion by 2030, larger than the GDP of many countries today, including Portugal, Colombia, and Malaysia. However, this economic growth comes at a cost: the city lost 43% of its green cover in three decades since the 1980s and currently has a per capita accessible open space of 1.08 sqm/person[1], much lower than the Urban and Regional Development Plans Formulation and Implementation (URDPFI) guideline of 10-12 sqm/person for Indian cities. With a green cover of merely 12.3%, Mumbai has one of the lowest percent of area within the municipal limits identified as “green” (See fig 1). In 2018, 31% of the city’s total land area, has an average surface temperature of 30.5 degree C or higher, a 174% increase from 1988. Areas most affected included SGNP, Aarey Colony in Goregaon, Mulund, Bhandup, Gorai, Malad and Versova creek. These areas are home to many vulnerable communities, with Bhandup and Mulund having a 73% and 54% slum population respectively. In the absence of open spaces such areas become urban heat islands. Therefore, there is a need for finding climate solutions that protect vulnerable communities by equitably distributing the impacts of the solutions.

[1] Open spaces are defined as areas that are green, accessible and open to the sky. Urban studies use a vast number of formal terms and definitions to refer to ‘urban open and green spaces,’ including green space, urban greenery, open space, public space, public gardens and parks. These terms have been used interchangeably.

Mumbai’s diverse ecosystems offer protection to its citizens from extreme weather-related events such as high tides or floods. A third of its area constitutes natural open spaces such as forests, water bodies, mangroves and wetlands, including the Sanjay Gandhi National Park which falls within city limits, and the city can do more to conserve, protect and better manage its natural ecosystems. The Mumbai Climate Action Plan developed by WRI India emphasizes the need to increase the green cover and biodiversity in the city in a planned and inclusive manner. When integrated within urban development, it offers several co-benefits (fig 2)

Urban heat islands can contribute towards heart related deaths, fatigue, respiratory difficulties and heat strokes. In 2015, over 2400 people died as a result of severe heat waves in various Indian cities. Mumbai’s scarce green cover is a major factor driving this risk. A gap analysis indicates the need for augmenting the municipal budget, documenting open spaces as well as coordinating policy making for green and open space management. Increasing the green cover has dual benefits for the city, it will increase heat resilience as well as the city’s ability to absorb carbon dioxide.

The city regularly faces flood risks during the monsoon season. This is due to the compounding impacts of increasing extreme rainfall events, increasing risk of storm surges and increasing urban growth. The effective protection of mangroves and wetlands and subsequent integration of nature-based solutions, such as sustainable urban drainage systems, permeable pavements, swales, and rain gardens to help with water retention and reduced flood risk. Rain gardens, being explored by cities like Hyderabad for example comprise native plants with fibrous roots that also attract biodiversity and act as a natural filter.

A study by WRI India highlights that the city’s slum settlements are five-six degrees warmer than their neighbouring housing societies.  Green space availability varies amongst the different wards of Mumbai (fig 3). In Mankhurd, a low-income area, green spaces are mostly locked in as wetlands. Whereas higher economic zones like Pali hill have more accessible open spaces in the form of parks. MCGM is developing a new gardens policy, with an aim to convert 1068 plots into gardens and playgrounds. Proposed policy aims to include NGOs, companies, housing societies and individuals in the management of green spaces.  The city must develop an equity index to understand the current distribution of green spaces and work towards a more equitable distribution of new green spaces, engaging with the public through workshops and mapathons, to develop a green cover action plan for the city.

With more than 2.9 million trees spanning 460 types, Mumbai has a rich biodiversity, which extends to a diverse coastal ecosystem and marine ecology. While the city has recently constituted a biodiversity management committee, the next steps, must ensure developing a baseline biodiversity inventory for the city, calculate the biodiversity index and allocate funds. The city can also develop a local biodiversity strategy and action plan which serves as a guiding strategy supported byspecific actions to help local governments achieve optimal governance of biodiversity and ecosystem services. This can be aligned with India’s national biodiversity action plan (NBAP).

Mumbai recently joined the Cities4Forests initiative to commit to a more scientific and targeted effort to increasing its green cover, especially in vulnerable areas. The city also signed C40’s urban nature declaration committing to achieve 30-40 percent increase in green space, increasing more permeable spaces within dense urban areas. Moreover, the MCGM has a well-established garden cell that focuses on reviving and building recreational open spaces across the city. These opportunities set Mumbai in a position of advantage to leverage its finance capital towards the restoration and conservation of natural ecosystems to increase city resilience and capitalise on the sequestration potential of trees and open spaces.

This blog is written by Ramya M.A and Prutha Vaze

Mumbai along with C40 Cities brings to you the Women4Climate Mumbai mentorship programme 2021-22. This programme aims to inspire and empower the next generation of climate leaders in Mumbai!
In the run up to COP 26, we are co-curating the @tedcountdown from Asia.
Yesterday, hon’ble minister @adityathackeray kicked off ‘India’s Road to COP26’ at #ClimateWeekNYC.
43 cities and urban clusters in Maharashtra will go carbon neutral by mid-century by joining the @UN’s #RacetoZero campaign! Together, these cities cover a floating population of over 60 million.
Inviting everyone to give their suggestions for the Mumbai Climate Action Plan. We need to hear from you all to ensure that the plan resonates with the idea of Mumbai that everyone wants!
#MumbaiClimateActionPlan
Check out the #MumbaiClimateActionPlan on https://mcap.mcgm.gov.in
Mumbai is drawing up its #ClimateActionPlan to reduce the impact of greenhouse gas emissions & climate risks, in line with the requirements of @C40Cities. Join the discussion to know #MumbaiClimateActionPlan at 12.30 pm, August 27th.